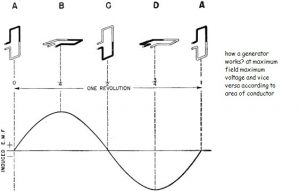 Science is not a magic. it always exists in nature and scientists or engineer only make them usable or visible by machines. same like this electricity is not magic, it is also produce one of the nature quality which states” when a conductor is moved in magnetic field , there is potential difference on conductor  end” this phenomena is used in alternator or AC generator. when a conductor “armature” is rotated in magnetic field it produces potential difference of voltage which cause to move charges from one end to other of closed loop. these moving charges are called current.

This site uses Akismet to reduce spam. Learn how your comment data is processed.